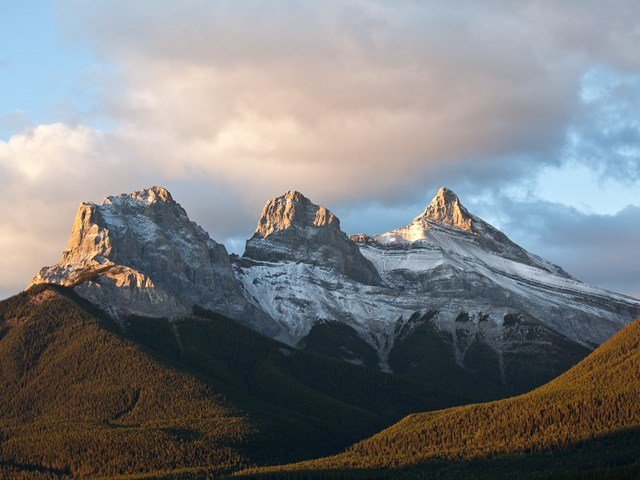 Before they became what they are now, they were something else. Alive with everything there was: coral, molluscs, algae. Dead with sedimenting bones, cartilage, flesh. Thrust by subterranean forces out of saltwater and up into thin air. Scraped by glaciers, wind, snow.

No longer submarine, they still drew water from the clouds and stored it in their crevices. Trees dug roots into the earth and birds perched on their branches. Hooves and claws and padded feet tripped across them. Tiny bodies slithered out of mothers, grew, died. Rotted faster even than the white aspens shooting up and keeling over. Nothing disturbed their sempiternal slumber.

This all went on for thousands of years. The three sisters didn’t, of course, think of it in terms of years. The passing of time is only noticed if something changes.

And then it did. Time ruptured. Split like an earthquake cracks a continent in two.

The hairless two-legged creatures were the least likely to survive on earth, and yet, here they were, accelerating time itself.

The sisters had no idea what woke them up. The ravens thought it was the deforestation. The butterflies thought it was the greenhouse gases. Nope. It was the oceans. The little dying critters in the coral reefs cried out in panic as they overheated. Their kin, high up in the Rockies, heard them and jolted awake.

Little Sister woke to furry pikas scurrying on her peak. “Hey, you’re tickling me,” she giggled.

The pikas didn’t hear her in their panic. “Go, go, go!” they urged their panting babies. “Up where it’s cooler.”

It was really hot. What was going on with the trees? They looked so sickly and sparse. And how come there were so few insects swarming around that elk carcass? Little Sister swung from joy to despair.

“Sisters! What’s happened? And what’s going on with me? I’m different! I’ve got all these emotions welling up like magma inside me!”

Big Sister felt anger surge up inside her for the first time. “I think those humans have done more than pollute. They’ve tinged even us with their emotions. We’re having feelings like them!” she said.

It was awful. Middle Sister felt like her heart would break to see the bears, her favourites, burned by forest fires.

They saw the calamities around them, and all three of the sisters yearned (that was another particularly painful feeling) for the days in which they just were.

Middle Sister said, “The world is a complete mess. We must protect the lynx and the ravens and the lodgepole pines from all these hurricanes and droughts and heat waves!”

Little Sister said, “It seems like the humans had better cut it out, immediately.”

The three of them thought.

Big Sister burst out, “I know! I’m the tallest and pointiest of us.” She peered around to see her reflection in the lake. “Look at the way my apex glows when offset by the Northern Lights.”

Little Sister rolled her eyes. “You’re so vain! I bet you think this song is about you,” she hummed under her breath.

Big Sister didn’t even hear her. She was so busy preparing herself for the event that would animate the humans’ faith. She waited till there was a large group of them gathered below her, celebrating the approval of an oil pipeline. And then she let them have it. A rock slide that made the famous Frank Slide look like the Styrofoam peanuts they were always dumping in the landfills. Every single one of them was flattened to death.

Immediately, humans started to flock around her, interpreting the devastation as evidence of her wrath. “We’ve ignored the power of nature. Let’s prostrate ourselves to this sacred colossus!”

They didn’t really know how to worship, however. They were used to venerating the stock market and pop celebrities but sensed that a mountain would demand something else. So they fashioned a religion that included sweat lodges and rosaries and meditation and asanas and hallucinogenics and fasting. The chanting was lovely, but Big Sister didn’t get what all their crystals had to do with her.

“Don’t they know I’m made of sea animal bones, not quartz or amethyst?”

Little Sister said, “It all seems pretty woo woo to me.”

At first, Big Sister was into it. She was righteous about the strict dogma that they imposed on each other, and even joined in on the punishments inflicted on those who didn’t donate tithes or practise self-care. “Infidels!” she’d think as she flicked them off her slopes, scattering their bodies into the gully below.

Things started to get weirder when they built huge churches for their televangelist preachers—“Jeez, they’re so screechy!” Then the Magic Mountain faith-based ski resort got franchised across the Rockies. The final straw was the penitents who crawled up her belly and smeared their bloody knees all over her gleaming white rock.

“This is worse than I thought,” she said to her sisters. “These people are idiots!”

Big Sister had only one way to fix things.

“Oh no, here she goes again,” said Little Sister when she saw her piling up huge snowdrifts.

The avalanche squashed the loudspeakers, the temples, the self-improvement bookstores, and the ski hill.

“They can go have faith in something else,” Big Sister intoned, her face stony and set. The snow gathered in her wrinkles as she brooded in silence.

Middle Sister cried for years, the tears running down her sides into a puddle the size of a lake. Little Sister tried to distract her. “Pee-yoo, what’s that smell? Did you pass gas again?”

Middle Sister said, “Sorry, my sulphur gets out of control when I’m sad.” Then she perked up. “Hot springs—that’s the answer!”

“Um… I don’t exactly see how they are going to stop climate change?” said Little Sister.

“The humans need to relax! Get pampered. Then they’ll behave.”

Middle Sister didn’t even hear her. She was positively burbling. “Mud soaks! Salt scrubs! Banff distillery gin cocktails! For the pool, I’m going to import marble from our Italian cousins.”

“This is such fun! I’m going to give them other things to make them even nicer.”

“Uh oh, I don’t like where this is heading,” said Little Sister.

She watched as her sister neatly channelled the snowmelt into a rushing river. Next she carefully sloughed off broken rocks into tidy piles. The humans, re-energized by their mineral spa treatments, got to work building a dam. Then they took the rocks for gravel. When that was gone, they began to quarry for shale and limestone slabs.

“I knew they would just start taking more and more!” said Little Sister.

Little Sister thought to herself, “Pee-yoo, the whiff of sanctimony stinks more than the sulphur.”

The day the human found the coal seam, Little Sister was busy trying to attract rain clouds for her parched forests. By the time she noticed him, he was whooping to his mates, “We’re going to be rich!”

“You’ve got to stop them!” she said. “Collapse a mine on them, break a boulder over their heads, sic the cougars on them, whatever!”

Middle Sister said, “I’ve got enough to go around! And look at how happy it’s made them!” At first, she was excited that the extraction allowed the humans to feed more people and make their lives more comfortable.

“Um…” Little Sister said. “Have you noticed the 3.5 million tonnes of CO2 that the coal plant is emitting each year?”

“Unavoidable corollary to this brave new society we’re shaping,” Middle Sister responded curtly, in a tone that wasn’t like her usual sweet self.

“What about the fact that they’ve quarried half of you away?”

“It’s given me a very svelte figure!”

Despite Middle Sister’s Pollyanna outlook, it was getting harder to maintain the illusion that this was a good idea. The coughing miners and the cardboard shacks creeping up her sides meant that not everyone was profiting from her largesse. “Share and share alike!” she yelled, but no one could hear her over the din of the hydraulic jacks.

It was the garbage that really infuriated her. “Those ungrateful wretches! Discarding the empty booze bottles and Egyptian cotton towels and mosaic tiles that I gave them. That landfill is going to be as tall as I am!” she said to Little Sister, who was preoccupied with the acid rain etching rivulets down her slopes.

Her hurt feelings boiled up, making the hot springs hotter and hotter. They gushed over, shorted the electrical plants, and cooked all the people in a hot sulphurous broth. She shrouded herself in thick clouds so no one could find her anymore.

The last glaciers melted all around her. Hurricanes surged. The trees on Big Sister were infested with pine beetles and mostly dead. Coal fires roared in the seams of Middle Sister.

Okay, she knew that the humans were destructive. But she liked the ones who trudged up her sides with poles and sharp points on their feet. There seemed to be no purpose to the desperate panting scramble that they undertook to reach the very top of her serrated peak. Once there, they would hug and yodel and hold rectangles up to their eyes, swivelling their bodies to look in every direction.

When they went off to relieve themselves in the bushes, she inspected their pee. “It’s got traces of calcium, iron, and magnesium, just like my own rock. And their bodies are as chock full of toxic particulate matter as I am.”

“There is no us and them anymore,” she thought. “Me, the humans, the dying flora, the almost extinct fauna, the polluted rivers, the acid oceans—all of us, we’re in a state of becoming something else.”

Unlike her sisters, Little Sister knew it was too late. There was nothing she could do except to witness it all, never allowing herself to look away or imagine it otherwise. Her grief, as even the feisty magpies began to drop out of the sky, drew dark clouds around her serrated peak.

A few humans still wanted to be in her presence. There weren’t many, preoccupied as most of them were with war and sickness. But some still straggled up her shoulders and face with picnics. They ate and chatted together in her meadow, their bodies languorous with the pleasure of physical exertion. Their joy seeped into her very rocks and warmed her like sunshine.

The last one was the woman who came every day, even when she became so weak she could barely walk. She would climb up as high as she could, and then take off her shoes. She would lift her chest, spread her toes, and press her heels into Little Sister’s bare rocks.

One winter night, the woman lay down in corpse pose and didn’t get up again. The snow thickly blanketed her frail body. Over time, her body decomposed into Little Sister’s pores and her bones petrified into stone. Little Sister nodded gently.